There are a few good updates today (and a happy birthday wish for Wendi!). The oncologist came by yesterday to confirm that as they suspected it is a grade 1 pilocytic astrocytoma, which means it’s slow growing and extremely unlikely to spread anywhere else. Basically, if you’re going to have a brain tumor that’s the best type to have. Praise Jesus!
We’re seeing improvements. Judah has moved his face muscles more today, moving his lips and tongue. I even got him to snarl at me when I was being particularly aggravating. He’s been pretty agitated all day, but who can blame him. I’d be pretty angry too. More eye movements and head motion. God bless Mumzy’s hearing loss because it’s enabled her to find ways of communicating with him that no one else had found. And he’ll actually make an effort at high fives and fist bumps with Uncle Josh when everyone else just gets grunts. He let the speech therapist read to him for 30 minutes and she had him turning the pages. Started off with angry swats but by the end he was turning them gently and deliberately.
The neuro Drs also said they could try “clamping” his EVD (brain drain as we affectionately call it) which means they are seeing if he can self-regulate his spinal fluid. If he does well they could take the EVD out in the near future with no need for a shunt.
Things are getting better. He’s still got a long road ahead (as do we) and there are a lot of unknowns that we may still have to face. Keep the prayers up, they’re working! 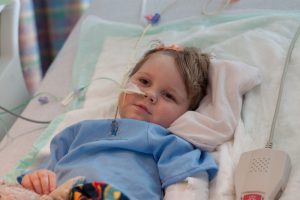