Skip to content
Today is the LAST DAY to order #TEAMJUDAH t-shirts and car magnets! 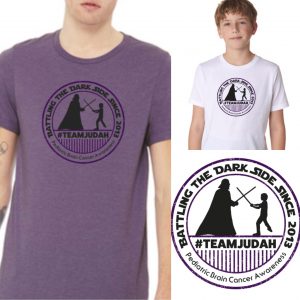 We are taking orders for shirts and magnets through today. Click here for more info on shirts/sizing/magnets/pricing
Email teamjudah@thackerpack.com with your name, address and what you would like to order. If you want a bracelet, there are still some in the office! We hope to mail/deliver everything by May 21st, before we break for the summer.
—
When we decided to make the shirts and magnets, our hope was to see people ‘wearing their love’ for Judah. That as we drove around town, walked through the grocery store, we would see #TEAMJUDAH everywhere! Already, as we see people wearing the free bracelets, we are encouraged and Judah lights up. He knows those people are on HIS team!
Please forward this info to anyone you’d like. We would love to see #TEAMJUDAH all over town!
Thanks?

ThackerPack.com will be back online soon. We’re in the process of moving to our new home. In the meantime, you can visit Judah’s CaringBridge page for the latest updates on Judah’s battle with brain cancer.

So he’s back in his room and looks pretty rough but I cannot express the joy to lay my eyes and hands on him!
They weaned his sedation to do a neurological exam. All limbs moved, pupils are slow but reactive. They said that is ok considering he is post op and highly sedated.
He will remain intubated and sedated until after the MRI tomorrow. They said if he can handle it (pray he can) they will turn the ventilator off and let him breath on his own tonight.

Judah had a reaction to a pain killer and was fighting the ventilator. The medical team was calm and fast and got him breathing again. He’s back on medicine that worked before. Seems to be good now.
Just came up to take him down for a 2 hr post op MRI. They will be looking at how the brain is reacting now that the tumor is gone, fluid movement, swelling, etc. We still aren’t sure if they will extubate him later today or not. We are praying they will at least try…
He has been moving a lot today, arms, legs, neck, opening and closing his eyes. He’s drugged enough to not feel anything and is mostly out of it. He did respond to my voice when I got close and talked to him, opening his eyes and reaching for my face. That’s one of the reasons we are hoping he will be ready to be extubated. We want to talk to him and hear him make some noise too.
Back from MRI. There is still a lot of swelling in the brain stem so they have decided not to extubate yet. They said they will reassess Sunday.
Other than what the MRI showed, he seems to be doing well.
Pretty disappointed that he will be sedated and tubed for 2 more days.