To be honest, I never got on the Avett Brothers train. I don’t NOT like them. Just never sought them out. So I have no idea what this song is supposed to be about. But as I was listening to a Prime Station, the above song came on. And some of the words struck a chord.

I wonder if Jesus sees the shape we are in down here? 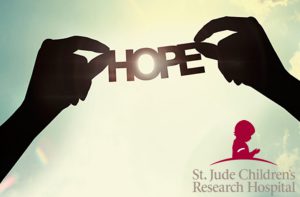 When we got invited to St. Jude we were filled with a renewed hope. And then Friday happened. Judah had a MRI and the news was not what we were expecting. His new tumor is continuing to grow. It has taken up the entire 4th ventricle. The original mass from 5 years ago is also growing. Chemo isn’t working. The neuro oncologist didn’t know if surgery would be an option. Surgery? Biopsy? Radiation? Inhibitors? All were mentioned. 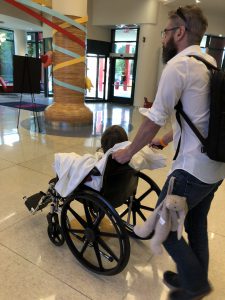 An appointment with a pediatric neuro surgeon was made. He told us that surgery wasn’t an option. That Judah’s tumor is diffusing and that makes differentiating between healthy brain tissue and excising tumor tissue impossible. He did say he wanted to do a biopsy. That a biopsy would allow St. Jude to sequence his tumor, look for markers and find a more targeted treatment. But what does no surgery mean? It means our options for treatment just got smaller. And the truth is, we never wanted Judah to have to go through surgery again because of how incredibly hard and heart wrenching it was to watch him relearn shaping and speaking his words, taking steps, concentrating on getting basic things down that no kid should have to do twice. But we would do surgery again if it meant he had to option to fight for ‘himself’ back. 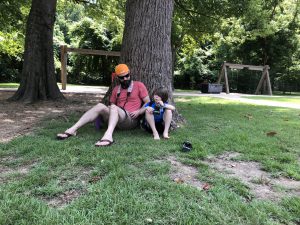 Radiation oncology consult was yesterday. We went into that meeting feeling so vulnerable and frightened. Lack of factual information can do that to a person. What we had always heard was that because of where Judah’s tumor is (brain stem), radiation would be the last choice. That it was dangerous. That it could cause cognitive deficits. Physical deficits. New cancer later in life.

I wish I could say that all our fears were assuaged. They were not. If anything, the hypotheticals made sitting in this awful waiting cycle worse. Because now we know, if the biopsy comes back 1 way, those hypotheticals all of a sudden become reality. We are doing our best to set all the information we learned aside. Store it away with all the other information we have learned over the last 10 days. It will still be there when we need it. 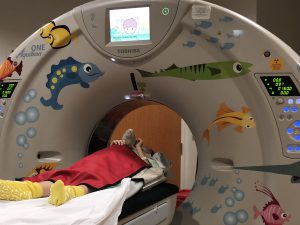 Today we were admitted to Le Bonheur Children’s Hospital. Judah will have a CT scan and MRI for precision measuring to prepare for his biopsy surgery tomorrow. While we are here, the Tumor Board at St. Jude is happening. All of their best and brightest minds will be together to review Judah’s case to try to come up with the best course of action to stop Judah’s tumor from growing more.

The biopsy will happen tomorrow and is scheduled for 7:30 AM. We have been told that this is will not be traumatizing for him. That the surgery will take ~2 hours and that if all goes well, Judah will be off the vent and in his normal room right away. He will have normal recovery from anesthesia; groggy, grumpy, sore throat, and that his head will hurt. But it already hurts more than it should. The surgeon said he should wake up talking and walking etc. And that is such a relief to all of us! Before the biopsy, we decided it would be a good idea to cut Judah’s much loved long hair. Surgeons are not barbers. We know this from last time! Judah was very unhappy about having to have his hair cut off but we gave him the coolest hair cut we could think of, considering her had to have the whole back of his head shaved! 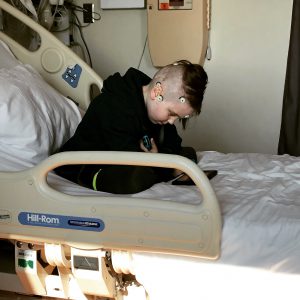 The biopsy results will take about a week. And Judah will be in the hospital for the same amount of time. We spend that time trying to be present and also distract ourselves. Food. Conversations. Movies. Switch playing. Snuggles. Kids being kids.

But we are going into this biopsy already wounded. We aren’t in the best shape…dumbed down and numbed. All the options in front us feel like bad ones. We covet prayers. Over the last 6 months, it has become immensely difficult to find words, any words, to pray. We cannot keep asking for God to show us He cares. Asking Him if He sees our suffering. Asking Him to give us a glimpse of His goodness. Because we’ve been begging. We believe that God is providing for us through our family and community. Moving their hearts to love us. Meals. Finances. Encouragement. And it has been more than we could ever say thank you for. Then we wake at 3AM to Judah screaming in pain. And we go to another Dr and they tell us more and more bad news. And then our 3 year old asks his big brother if he is better yet. Our 5 year old asks when we get to go home so she can see her friends and go to Kindergarten. It is all we can do to keep moving forward. We do our best. Smile and squeeze all our kids and say yes as often as is possible. And then hide when the wracking sobs come. The moment passes. We breathe. Matthew looks at me. There is an understanding and “here-ness” shared between us and we collect ourselves and start over. And I think it’s that “here-ness” that I miss from God. I used to feel His presence so keenly. I could feel his heart for me. For Judah. And could see His love for us in the little everyday things. Even when things were bad with Judah (or anything else), He was with me. But that’s gone. In it’s place is a wretched, broken, emptiness. A constant reminder of just how small and alone we are on this Earth. And I want so badly to keep believing that He isn’t finished with this story. That I can trust Him with my heart. With our son, his future, his life. It feels like too far to go. And it’s not because God hasn’t miraculously healed Judah, though that’s what we long for. It is because we feel abandoned and isolated from our Maker. And we don’t know why?

Where is the God who tells us he loves us and has plans for us? The Good Father, our creator. The mountain mover. The raiser of Lazarus. The silencer of storms. The healer of many.