At Judah’s MRI in February there was a new area of enhancement (an area where the contrast agent glows on an MRI) around his tumor. At the time, the doctor said it was an unlikely, but possible sign of growth starting up again and that we should scan again in 3 months but watch him closely for new symptoms. About 3 weeks ago, Judah woke up in the middle of the night with a headache and a fever. We gave him tylenol and put him back to bed. He seemed perfectly fine the next day so we didn’t worry about it much. Then, for the next two weeks, every 48-72 hours the headache and fever would return. By about the 3rd headache, we were calling doctors trying to figure out what was going on. The oncologist said the cyclic nature of the fevers didn’t jive with the location of his tumor, so he thought it was some kind of infection. The neurologist said that without other symptoms, such as lethargy or vomiting, it was unlikely that it was a shunt infection or malfunction. The headaches continued, as did the frustrating conversations with doctors who didn’t think it was a problem and didn’t want to do anything about it. Finally, on Monday of last week we took him to our pediatrician who thought it best to run some blood tests. The normal infection and virus tests were all negative, but Judah’s white blood cell count was more than 3 times what a normal healthy persons would be. “Maybe his cancer team will listen to us now” we thought, but it still took 3 more phone calls and a strongly worded email before they agreed to move up his MRI.

We drove to Nashville Wednesday night, had the MRI on Thursday morning, then back to the oncologist on Friday. We prayed a confusing prayer that begged on the one hand for the MRI to show no growth, but on the other for *something* to show us what’s going on so we could stop it. We got the latter. Judah’s tumor has begun to grow again. Thankfully the mass that is intrinsic to this brain stem (i.e. inside the good brain tissue) seems to be stable, but a small new mass has begun on the outside edge of the old tumor. It grew from a tiny line of enhancement to a 1.3cm diameter mass in two months’ time. I shudder to think how big it might have been had we waited the whole extra month until his scheduled scan. The doctor doesn’t think that surgery is necessary at the moment, but we go back to Nashville on Monday for them to put his portacath back in, thenTuesday morning to start his second round of year-long chemotherapy. We’ll be using a different therapy this time, the theory being that the previous regiment, though effective, failed to fully kill the cancer so perhaps a different type will. There are pros and cons to the new regiment. It’s supposed to be less destructive to his blood counts, so less chance of serious infection and hopefully he won’t catch every cold he comes within a mile of. He only has to have therapy every two weeks instead of weekly, but the infusions take longer so Judah will be in the clinic for 2 to 3 hours every time. This therapy restricts the growth of blood vessels so it’s possible the tumor will actually shrink somewhat while on this therapy, but that same restriction carries an increased risk of things like internal bleeding and bowel perforation. I sincerely hope none of you ever have to read the patient education literature that comes with these drugs. It causes the mind a unique kind of distress when the doctors are saying we need to give your child this medicine to save his life but the warning labels list at least 40 different ways the medicine itself could kill him.

Jesus encouraged us to pray for specifics. So we’d ask you to specifically pray that this chemo regiment is immediately effective in stopping the tumor growth and relieving Judah’s headaches. We’d ask that you pray that the side effects from the chemo are few and mild in nature. That on his follow up scan in 6 weeks it is really obvious that the growth has ceased and possibly even that the tumor has shrunk. That Judah is able to withstand physically, emotionally, and spiritually this grueling year of pain and frustrations. That Wendi and I are able to withstand the same. That this chemo regiment is definitively and permanently effective for stopping Judah’s tumor from growing. And specifically for Wendi and I, I’d ask that you pray for a strengthening in faith, hope, and desire for God. I know, intellectually, that ‘why’ is never the right question for God. He won’t answer it, and even if He did, I know I couldn’t understand it. But that doesn’t stop the voice from my heart from asking why. Knowing it’s misdirected doesn’t stop the resentment that rises up when I’m lying awake with fear and anxiety. So we need God’s good to show powerfully through the cracks in the evil that veils this world. And finally I’d ask that you pray for all those who are committed to pray for Judah, including Wendi and I, to maintain that commitment. The passion for everything fades over time, especially when things seem good, and this thing is going to need some long term, committed prayer to overcome. 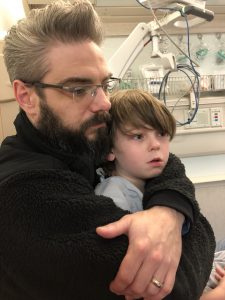 Our sincere thanks to all of you for your years of love and continued support of our family.