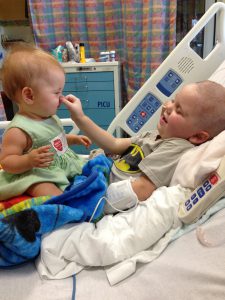 Still in the PICU.

Judah had a couple of naps today and during each of them he had a “desat”. That’s med-speak for his blood losing it’s oxygen saturation level. I put it in quotes (and yes I’m a little bitter) because I don’t actually believe either of the occasions were a real loss of oxygen in the blood but false positives inherent to the way this is measured. I made my case to the docs but out of an abundance of caution they took him off the list to move to a normal hospital room and decided to keep him in the PICU. We’ll pester them again tomorrow.

Otherwise he had a fantastic day today. He said a bunch of words today – honey, piglet, owl, brave, stuck, rabbit, bubby, my sister and parasaurolophus. None of them are perfect but the speech therapist says that his lips seem to be functioning well but his tongue’s not all there yet. He was super active, fighting dinosaurs with me (matthew), kicking his feet, sitting up on his own and batting both arms at a balloon. The PT/OT people had him up walking though not really holding his own weight up and he actually interacted willingly with them.

The next 6 days are likely to be frustrating and hectic. Judah’s oncologist wants to start chemo as soon as possible. While his tumor is the lowest grade and slow growing, it’s location means that any growth could have potential long term complications. So chemo starts Wednesday. Monday morning he’ll have his port put in (yes, another surgery with anesthesia), Tuesday he’ll have a bevy of tests to get some baselines before he starts chemo. Wednesday he gets the first treatment, followed every Wednesday for 10 weeks, then a two week break, then 4 weeks on and 1 off for a year.

Our problem is therapy. We had hoped they would be able to work something out were he could get pretty intensive outpatient therapy at Vandy but it’s not going to be ideal. For one they don’t have speech therapy so we’d have to find some place else for that. Second they would be wedging him in wherever there are openings in whomever’s schedule had an opening so there would be no routine or chance for a therapist to build report with him. It would be a different therapist at a different time every day for weeks and probably only an hour a day. There are other therapy centers that offer all three types, O/P/S, but they don’t take insurance and while their rates are lower than places that do take insurance we’d still be paying a ton out of pocket for the amount of therapy he needs.

Judah’s becoming more like his old self everyday but still needs lots of prayer. Prayer for continued healing, prayer for him to have patience for the dozens of people poking and prodding him and making him do stuff all day, prayer for a working therapy plan (and a way to pay for it), prayer for yet another surgery, prayer that chemo has few if any side effects and that it is effective in stopping the tumor permanently, prayer to get out of the PICU, prayer to get out of the hospital, prayer that Wendi and I have patience with the docs, nurses, bureaucracy and insurance companies and prayers for a long road ahead.